Previous Next
By the Rivers of Babylon 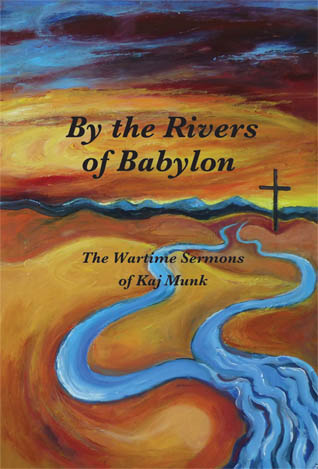 The Danish pastor and poet Kaj Munk was murdered by the Gestapo on January 4, 1944. The news of his death was a shock to a nation that had already suffered through four years of German occupation. The Nazis thought that they could silence him. They were wrong. Kaj Munk’s voice had been a rallying cry in the long dark Danish night, and it continued to be an inspiration for the Danish people. Although there was then, and continues to be to this day, controversy surrounding the life and works of Kaj Munk, the fact that he grew increasingly critical of the Nazi occupiers, that he refused to be silenced, and that he paid for that with his life, cannot be denied.

My grandfather, Kaj Munk, was murdered fourteen years before I was born. But he came alive for me through reading his works, and through the many memories that my mother and grandmother had of him.
I became fascinated with him through reading his theatrical works, but I came to love him through reading his sermons. Although most of the sermons in this book were written during the war, and do speak of the need to resist the occupation, his love of mankind runs like a red thread through all of them.

“I do not stand here to preach hatred against anyone. That is quite impossible for me. I don’t even hate Adolf Hitler.”

He could say that, even knowing that German assassins could come for him at any time. And they did a few days later. My mother, who was twelve when her father was murdered, talked about him as a family man. He played often with his children, and would tell them stories. And with my mother, Yrsa, who was the oldest of the children, he also shared his art.

He had a daily routine, where he would work on his dramatical works in the morning. Then, over a cup of coffee and honey bread, he would read aloud the morning’s work for her. She was a very precocious child who could take it into her head to say; ”Dad, Dad, you can’t write the same thing on page twelve that you wrote on page eight.”

He wrote a poem for her, in which he says:

You were a little girl child,
So bright, and yet some mischief.
With a heart so true,
Of all the people it was you,
Who was the poet’s best friend.
And from whom he learned the most.

She missed him throughout her life, but she understood completely why he had to do what he did. She never blamed him for not having fled to Sweden to save his life.

He loved God, life, his family, and nature. Yes, he loved the whole world. He has always been a role model for me. He wrote; ”Never, never, never ask if it’s worth it—ask only if it’s true!”